of felt recoil and the introduction of the L1A1 made this carbines operational history rather short. Good No5’s are becoming increasingly rare, with most carbines appearing on the market in a fairly shabby and worn state. A pristine No5 will set you back in order of £800-£900 if you're fortunate enough to find one. I found this No5 on a obscure website and after a phone call was told it was in a pristine condition and had it delivered. True to the dealers word this rifle was very good with matching number throughout and a “as new” barrel. The rifle was manufactured at Fazakerley in December 1946  and bears the Serial No Y8141 on both the receiver and barrel. As this rifle was to be a research project for myself, it was fully restored throughout and bedded to maximise its accuracy.

This rifle arrived with a sporter stock. However it was my intention to refit it with No5 woodwork and convert the rifle back to it original format. Original No5 woodwork is no longer available unless it is cannibalised from a deactivated rifle. However this is an expensive option, alternative you can buy replica woodwork from the US or make your own from No4 woodwork. I started by ordering replica wood but this was next to useless as it didn't fit or even fit the profile of the original wood. My final solution was to retain the replica butt, improve it and make my own forend and upper hand guard from No4 woodwork.

The receiver, trigger and bolt assembly was in a typical condition for a rifle that has been sitting in storage for a long time, however once all the parts where cleaned in solvent, all the debris and old oil removed, parts were polished and the action restored to a superb standard with no noticeable wear. External finish was good although there was some loss of finish to the barrel but overall the rifle did not require restoring. The barrel and bolt face showed no signs of wear which indicated the rifle was not issued to service units prior to its sale into the trade. Once rebuilt and gauged, the rifle cycled and functioned without fault. Barrel condition was excellent and at the time of writing was being tested for it accuracy potential.

Although I intended to fit an original No5 rearsight Foresight my deteriorating eyesight precluded me from using the iron sights on this carbine, so I retained the scope that originated with the Sporter conversion.

Originally conceived for troops requiring a shorter , handier  carbine, the rifle came to fame in the jungles of Malaysia and other far eastern outposts where the standard No4 rifle had it disadvantages. The Lee Enfield No5 was a natural adaptation of the No4 with various modifications to reduce its weight and length. Although popular with soldiers due to the weight reduction and general handiness these modifications effected the rifles accuracy, increased level 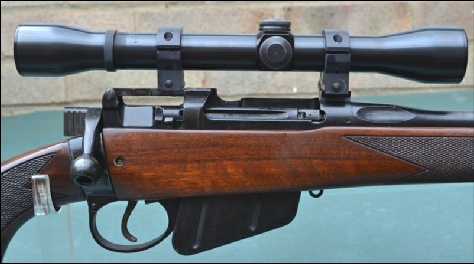 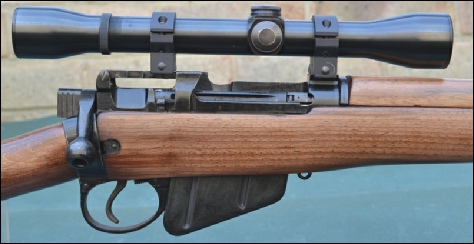